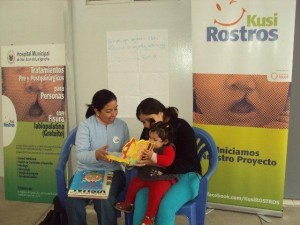 Maria Teresa has been chosen as the recipient of the 2014 CPF Leadership Award. She will be honoured at the ACPA annual award luncheon in Indianapolis, Indiana on Thursday March 27, 2014.

The CPF Leadership Award recognizes an individual or group (non ACPA member) that has demonstrated exceptional service and leadership on behalf of individuals with cleft or craniofacial anomalies and is awarded at the Annual Meeting of the American Cleft Palate-Craniofacial Association (ACPA).

Transforming Faces (TF) is a Canadian charity that works with local partners to provide multi-disciplinary cleft care in developing countries. Working with local cleft specialists and their patients, we are often inspired. Maria Teresa Torres de Salcedo, from Lima, Peru, has not only inspired us – but she has inspired many patients and their families with her humble and determined approach.

In 1997, Maria Teresa was in her last year of university when she met a child who had cleft lip and palate, a common birth anomaly.  At first, she thought a surgery was all he needed. It quickly became apparent that the child needed access psychological support and speech therapy.

“While not a health care worker, I arranged for him to get care,” she explains. “After I helped that child, I started to receive phone calls from parents seeking the same type of help.”

“I helped one child and then I had a reputation as the person to go to!” she says, with a slight smile. 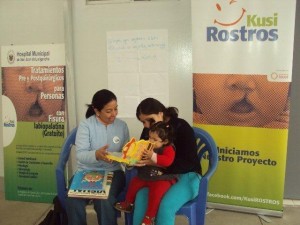 Pictured: Maria Teresa with Sayuri and her mother in Peru.

In 2007, Maria Teresa was compelled to create a for-profit called Asociacion Civil Splendor to assist parents. She saw that there was a huge need to create an organization that could provide parenting advice and support children with learning disabilities.

Cleft lip and palate remained an issue that she was passionate about and she saw that, despite available services, transportation was still a huge barrier to accessing health care. She decided to create a non-profit arm of Splendor in 2011, called KusiRostros, to specifically reach out to children with cleft lip and palate and their families in their own communities.

“There was a need to go to where the families were. For the families it is very expensive and difficult to get transportation to the hospital and pay for the services,” she explains.

In 2012, following a feasibility study and with the support of TF, KusiRostros began to provide decentralized care for families of children with cleft lip and palate in Lima, Peru through four community rehabilitation centers (CRCs) in impoverished areas surrounding Lima.

The feasibility study found that post surgery cleft care is available in main hospitals and health care centers. However, 71% of interviewed parents travel 2-7 hours to access cleft rehabilitation care. Factor in the cost in transportation and only 21% of families continue with post surgery treatment.

Maria Teresa, the co-ordinator, is joined by a dentist, speech therapist and nurse co-ordinator, as they travel to the CRCs on a weekly basis to provide medical, feeding and counselling support for families, close to home.

The goal of the CRCs was to treat 100 children in the first year of the three year pilot project. The response was overwhelming. A total of 200 children were treated and an additional CRC was added to meet demand. Families used to travel up to two hours to receive care and pay up to $12 to receive speech therapy. Now they only have to travel 20 minutes to receive free speech treatment for their children.

Photo: Maria Teresa with Sandra Faschlict at the 12th Cleft Congress in Orlando

Maria Teresa’s determined attitude to fill the gaps in care has also served as a beacon of inspiration for some of our other partners. She empowered a rehabilitation team from Argentina and helped us set up Fundacion GAVINA, which serves Tucumán and neighbouring provinces where the most acute poverty levels are found in Argentina.

“She has inspired and empowered many people. She has this innate entrepreneurial ability and a lot of vision,” said Esteban Lasso, TF’s Executive Director.

Maria Teresa has now set her sights on raising awareness. She is a founding member of the newly created Peruvian Cleft Palate – Craniofacial Association because she believes there is a great need to train medical specialists and share knowledge.

In the future, she hopes to create a reference centre where more complex cases could be treated.

“I see that there are not just physical scars that they endure but emotional as well– and I am motivated to help,” she explains.